Print your own pancake 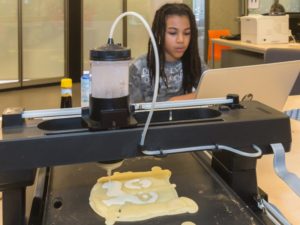 A printer that prints chocolate is still a thing of the future, but Kennislab (knowledge lab) in Steenwijk, the Netherlands, makes it possible to print a pancake.
A paper print we know, but a pancake? Jasper van der Geest is enjoying his Miffy pancake, “tastes great”, he says between bites. In the Kennislab of the library in Steenwijk children can design their own pancake with a computer.

“The design is put on an SD card and the pancake printer gets to work”, says Geertje Tissingh who works there. “The batter comes out of a tube above the printer and the printer makes the design and cooks it.” The printer display shows when the pancake is ready. “It would be great if the pancake would roll off the printer, but for now we scoop it up.”

Jasper is certainly into it “I´m now making a bearhead pancake. Look, they are already preparing everything.” He is ready to attack as soon as it´s done. “The food printer that produces the delicacies comes from the US”, says employee Herma Rijkeboer. “There is also a printer which makes chocolate and we´d like to have that here as well”. Jasper´s sister Carlijn has tried to make a heart. “It didn´t really work as the batter is too thick. I will try another one”. She is now drawing with a 3D pen which is “really fun”.

The Kennislab officially opened in October, but has been accessible for 6 months now. “It was very busy in the beginning, but it slowed down a bit during summer. People go on holiday.” During the Christmas break there were 70 visitors. “Not just children, parents may enjoy it even more”.