Cimpress and Kornit Digital take their collaboration to the next level 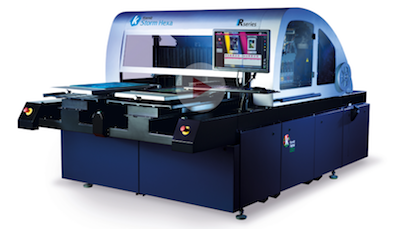 Under the agreement, Kornit started supplying multiple Avalanche Hexa R-Series systems to Cimpress last year and will continue to do so in 2017.

The new systems will be used in several international production facilities to boost Cimpress’ production capacity as well as to expand the range of possible applications. The Avalanche Hexa R-Series is one of Kornit’s most advanced and productive technology platforms and will empower Cimpress to digitally produce more colorful and sophisticated personalized products, on a vast array of different garment types.

This agreement between Cimpress and Kornit marks a significant milestone in the ten-year relationship between both companies. Cimpress started out with Kornit Storm systems in its production facilities and over the years has expanded the systems to multiple facilities throughout Cimpress’ global manufacturing network as demand for custom apparel has grown.

Speaking about the agreement today, Evert Karsen, Senior Director of Global Procurement at Cimpress said: “As the world leader in mass customization, we are committed to delivering an enormous variety of customized products to customers across the world. We are delighted with this partnership and know that Kornit’s Avalanche Hexa R-Series systems will deliver tangible benefits in terms of quality, flexibility and productivity, allowing us to continue to meet the growing and evolving needs of our customers.”

Gilad Yron, Kornit’s Executive Vice President of Global Business added, “Since 2003, Kornit has been focusing on developing digital, highly productive tools for the mass customization business models of today. Key customers and partners like Cimpress have contributed valuable feedback, played a significant role in defining requirements and validated our commercial approach. We look forward to continuing the relationship and helping Cimpress to satisfy the ever-growing demand of their customers even better in the future.”

About the Kornit Avalanche Hexa R-Series

The Kornit Avalanche Hexa R-Series is designed for the mass customization of garments. The system features industrial production capabilities, and is a very robust platform designed for heavy-duty use. The system generates very high speeds and excellent print quality. The Avalanche Hexa R-Series is perfectly suited to be used all day, every day, for the production of higher volumes. In addition, Kornit’s NeoPigment™ ink system meets the highest environmental regulations, including Oeko-Tex Standard 100 and GOTS pre-approval. Suitable for printing on multiple fabric types, and equipped with inline pre-treatment, the versatility and efficiency of Kornit’s systems is unmatched.

Cimpress to Decentralize Its Organizational Structure