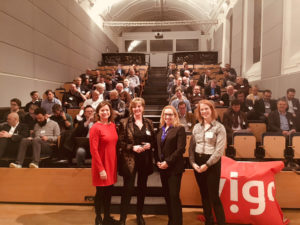 Guest Blogger – Jill Geens asks why are there not more women in the Print and Graphics World?

I have to admit, since I know “Straffe Madammen”, founded by Elke Jeurissen, I tend to look around on meetings, in companies, on seminars and search for other women. Usually we’re not numerous. Are we really a minority? Are other women not interested? Or don’t get the chance …

In some numbers, we match men. 50% of the world’s population is female. Well, that’s nicely dived. But then numbers start to look pretty bad for us women:

Are these numbers representative for my – graphic – world? Yes, they are! Last January I faced the facts myself at the “VIGC* trapt af”-event: 70 attendees of whom only 4 were female (one of them being a speaker): 5%. Why are there so little female entrepreneurs in graphics?

On the contrary! A study of McKinsey & Company “Women Matter” from 2014 teaches us this about women’s equality in the economy: “Women’s economic equality is good for business. Companies greatly benefit from increasing leadership opportunities for women, which is shown to increase organizational effectiveness. It is estimated that companies with three or more women in senior management functions score higher in all dimensions of organizational effectiveness.”

It is a proven fact that companies with women in charge gain more profits than companies with an all men board. A lack of talent doesn’t seem to be the problem.

Is it our family situation?

This factor seems one of the main reasons. Women are still in the “caring” position so you tend to assume that women choose family over career.

Company management tends to hire men more easily for a key role in their company because men don’t go on maternity leave or ask for a part-time job after they become a parent. 1/3 of women in management positions have children to 2/3 of men with similar jobs.

Figures show though that becoming a mother is not necessarily the sole reason. In Denmark men and women get to divide one year of paid leave when they have children. Yet only 30% of all Denish managers is female.

Is it the needs of the business ?

As a graphic designer, you need to burn the midnight oil from time to time. And sharp deadlines don’t care about sick children, husbands stuck in traffic or other family emergencies. I would be surprised if this was the case. Tough deadlines appear in all kind of jobs. Not only in graphics.

Then what is going on?

Good news is these graphic gazelles, they do exist! In the U.S.A. as much as 54% of graphic designers are female! YES! In the U.K. 70% of the graphic design students are female. Great! The Nike swoosh was designed by a woman in 1971 and Susan Kare is responsible for quite a few original Apple interface elements. And still, I can’t stop thinking that something is off balance here.

• 11% of creative directors are female in the U.K.

• In the U.K. 80% of all purchases are decided by a woman, while in advertising 83% of creatives is male. Such a missed opportunity!

Is it the men?

There is less coverage for female top designers. In “The Dictionary of Graphic Design and Designers” that spans the period from 1840 until now, only 25 women are mentioned on a total of 357 designers. (7%)

“Men writing about other men”, you know.

In 2018 there are still quite a lot of talented designers finding themselves trapped under the glass ceiling. The typical division of roles that pushes women in the position of caregiver has got to go if we want to see more women in management roles. The “houseman” is still not established. Creating awareness about gender inequality remains necessary. We need more female role models. It’s the only way to tip the scale and get it into balance. It would be a win-win situation in so many ways.

Is it only the men ?

Definitely not. There is another important culprit … Women themselves !

Sheryl Sandberg (Facebook CEO) describes the problem very clear in her TedTalk “Why we have too few women leaders.” (A real eye opener that you have got to watch !)

We place ourselves in second position. We have to put ourselves on the table at meetings. It’s time we find our opinion valuable enough to speak our mind. And when asked as a speaker, we need to put ourselves beyond our fears and grab the opportunity. We don’t do this enough!

We have to stop being so modest. We don’t get anywhere with that modesty! Men jump on tables to claim their success. Women call their success “being lucky” or have a colleague taking part of the recognition. Rarely taking credit for themselves. Who gets promoted ? Who is the subject of the paper? Not these women, that’s for sure!

We have to get our promotion machine working. After a big success, we just continue business as usual. So wrong ! We have to draw attention to that success more. How can other people or our management know what we have accomplished if we don’t speak about it? They can’t! The world doesn’t exist out of clairvoyants.

It is in our nature to underestimate ourselves. Men are more confident. Women keep on doubting, are afraid to take the challenge. A promotion? We don’t have all skills so we don’t apply. Men have 6 out of 10 qualities and they just go for that job.

We hold back. We want children and a family. The moment we realize that we start getting our foot off the gas of our careers, even before that family is really there.

When we finally reach a key position, most women are not likely to help other women climbing up the ladder because they’re afraid of the competition. Successful women in typical male environments are even harder for other women than men are.

Perception. A man that knows what he wants, is someone with character and discipline. A women with the same characteristics is described as bossy, unpleasant, a bitch.

Yet there is hope !

More women seek and find their way. “Women have created, perhaps inadvertently, a parallel industry of accessible talent. Many practice as independent designers operating out of their homes or sole proprietors of small firms often with one or two assistants.” – Moira Cullen [2] I can affirm that completely. Since January 2017 my company evolved from my second job to my fulltime job. More and more I see other women in my surroundings becoming an entrepreneur. We get to choose our own clients, play by our own rules and search for fulfillment without depending on an employer. The zeitgeist is finally starting to change and so are we. We stop putting ourselves in the corner and we take our destiny into our own hands. Margaret Thatcher noticed during her days in politics: “In politics, if you want anything said, ask a man. If you want anything done, ask a woman.” But oh … Thatcher was bossy wasn’t she?

Jill will be speaking about the ‘World of Design and Print’ at the Pure Digital event on Tuesday 17th April at 3.30pm.

You can register for free at www.puredigitalshow.com