Heimtextil in pictures: The first mayor show for digital printing

Heimtextil trade show is annually held at Frankfurt am Main fairgrounds and believed to be the most important international trade fair for home and contract textiles. In 2017, the January 10th to 13th event saw 2.963 companies from 67 countries, a clear up of 99 from last year. Visitor numbers were stable with almost 70.000.  (2016: 68.277).

Hall 6.0 was the place to visit for the digital printing community at Heimtextil, as nearly all relevant vendors and manufacturers had their booth there. The three exhibition floor building Hall 6 was centrally located, its „Theme Park“ heavily advertised all over the fairgrounds.

At Heimtextil 2017 HP showcased the Latex 365 printers as well as the recently introduced HP Latex 1500. HP displayed its Latex technology wide versatility in all kinds of flexible coated and uncoated materials, including applications such as wallpapers, canvas, printed flooring, textiles and faux-leather. HP took the decision to join Heimtextil five years ago as one of the first manufacturers from the digital printing community. „I still recall our first participation at Heimtextil where everyone was wondering what is HP doing at Heimtextil.  It’s amazing to see that the vision we had for the decoration market, is shaping. Applications are amazing and both designers and print service providers enjoy growth. This is just the beginning. All will become digital and decoration is not an exception“, said Francois Martin, GSB WW Marketing Director Graphic Solutions Business HP.

Mutoh took the opportunity of Heimtextil to introduce its brand-new ValueJet 1948WX, a 75 Inch roll-to-roll sublimation printer with printing speeds up to 100 m².

Heimtextil 2017 saw the  première of the “Digital Textile Micro Factory”. As part of the presentation, which has been set up in collaboration with “Deutsche Institute für Textil- und Faserforschung” (the German Institute for Textile and Fibre Research) as well as industry partners such as Ergosoft, Mimaki, Multi-Plot Europe (D.gen Distributor) and Zünd, a digital production chain was showcased live on siteKiian: Kiian Digital set up its booth a concept-space where visitors were able to see printing results first-hand. “During Heimtextil, visitors will discover a diverse array of applications showcasing these key selling points,” says Marco Girola, Marketing Specialist at Kiian Digital.” Continuous improvement of our inks’ performance by our superb R&D team is a key factor to our success.” 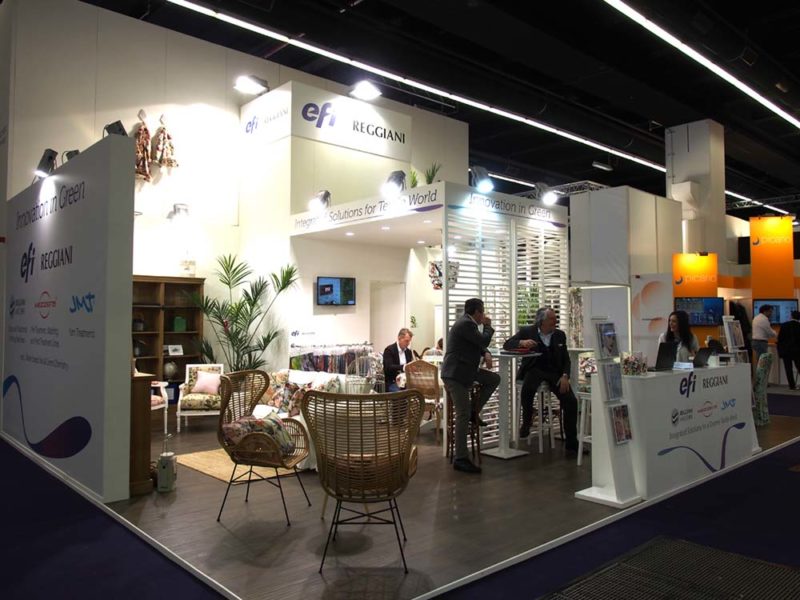 The Tiger-1800B was the high-light at the Mimaki booth at Heimtextil. The highly productive, high quality digital textile printer achieves a maximum productivity of 385 m2/hour. Mimaki completed its acquisition of renowned Italian textil printer manufacturer La Meccanica in October 2016.

Heimtextil Frankfurt in pictures: The first mayor show for digital printing in 2017

Sonja is manager of Rrrabbitproductions, an editor´s office dedicated to technology. A certified print designer before turning trade journalist, (digital) printing technology is her main focus. With excellent contacts into local markets, she is able to offer deep insights into the DACH region. Sonja operates also a WideFormatStories fun shop where you can order t-shirts and wide format related gadgets. This is the link to this special shop: https://shop.spreadshirt.de/WideFormatStories. She writes in German as well as in English for a wide range of print and online trade publications, gives lectures on digital and industrial inkjet, and offers translation, localisation and Social Media services through her office.